Syncrude has a rich history dating back to the 1950s, but the oil sands of Northern Alberta have a history all their own going back nearly 100 years before Canada even became a country.

The first European to see the Athabasca Oil Sands was fur trader Peter Pond, working for the North West Company, who was lured to the area in 1778 by tales of the rich fur harvests to be found there.

In 1788, Alexander MacKenzie was assigned to replace Peter Pond, and wrote in his journal; “At about 24 miles from the fork (of the Athabasca and Clearwater Rivers) are some bituminous fountains into which a pole of 20 feet long may be inserted without the least resistance. The bitumen is in a fluid state, and when mixed with gum, the resinous substance collected from the spruce fir, it serves to gum the Indians’ canoes. In its heated state it smells like that of sea coal.”

Other explorers were equally fascinated by the oil sands, including map maker David Thompson and Arctic explorers Franklin, Simpson and Richardson.

The first government-sponsored geological study of the oil sands was initiated in 1875 and carried out by John Macoun, a naturalist and Dominion botanist. Geologist Robert Bell headed another government expedition into the area seven years later. 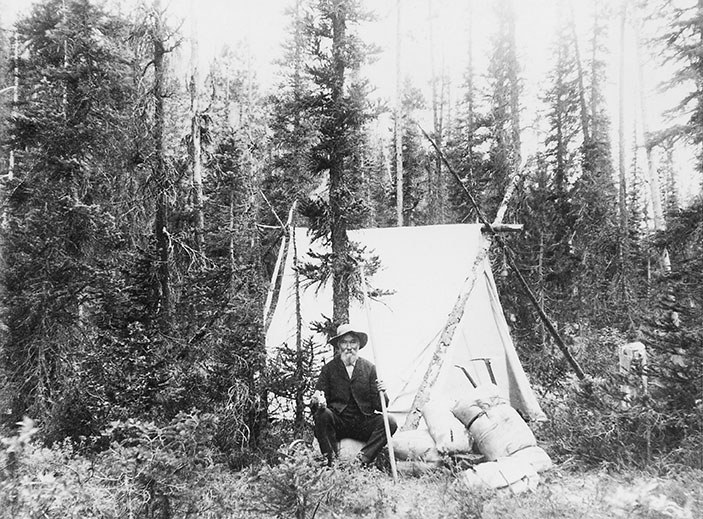 John Macoun conducted the first government-sponsored geological study of the oil sands in 1875.

That this region is stored with a substance of great economic value is beyond all doubt, and, when the hour of development comes, it will, I believe, prove to be one of the wonders of northern Canada.

The first attempts to develop the Athabasca Oil Sands commercially were made under the assumption that the bitumen in the area must be coming from pools of oil deep beneath the surface. In an attempt to locate these pools, Alfred Von Hammerstein drilled the first wells in the region, north of Fort McMurray. Altogether, between 1906 and 1917, about 24 wells were sunk in the search for the mother-lode of oil. None were successful at finding oil, but they did discover salt, which became a major industry in the Fort McMurray area for 50 years.

In 1913, Sidney Ells, a young engineer employed by the federal Department of Mines, began his work in the oil sands which was to last until 1945. Ells was an early advocate of the hot water flotation method of separating bitumen from the sand and he conducted a number of experiments to test this technique. He was the first to bring out samples from the area for laboratory testing. As a result, oil sand was shipped to Edmonton to be tested as road paving material. While the paving was successful, oil sand could not compete economically with imported asphalt and the project was dropped.

In the 1920s, entrepreneur R.C. Fitzsimmons used the same hot water flotation process to produce bitumen for roofing and road surfacing at a plant near Bitumount, 80 kilomtetres north of Fort McMurray.

HIM TO SELL THE OPERATION.

In 1948, the plant was taken over by the Alberta Government to investigate extraction methods with large scale equipment. By 1949, the plant was processing 450 tonnes of oil sand a day, but it was closed because the government was not interested in launching a commercial venture. Data from the experiments was used as the basis for a major study of the viability of commercial production. 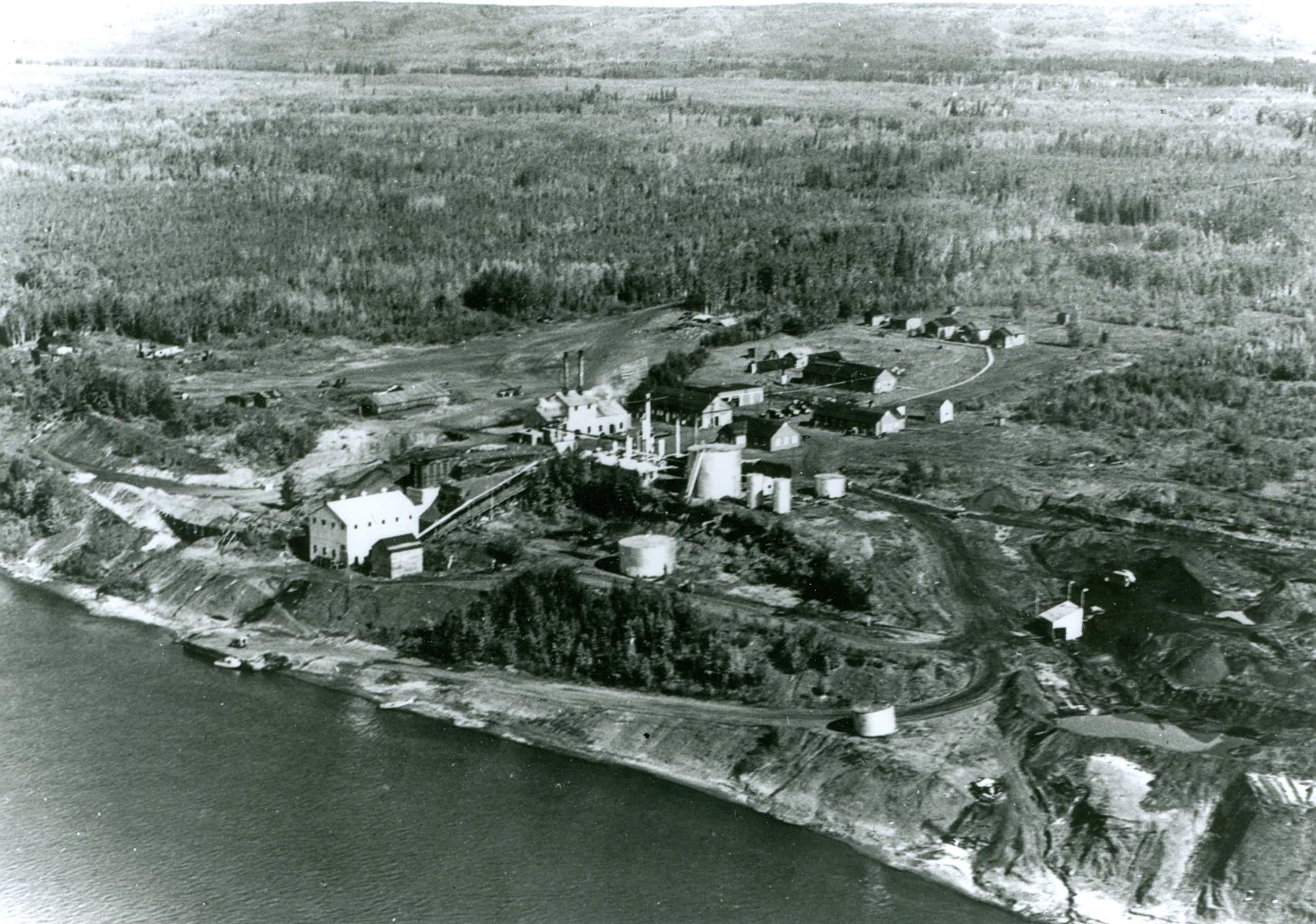 Credit: University of Alberta Archives.
The Bitumount plant produced bitumen for roofing and paving in the 1920s.

Dr. Karl Clark, a scientist with the Alberta Research Council in the 1920s, pioneered experiments with a hot water flotation process that involved mixing oil sand with hot water and aerating the resultant slurry. This would then separate into a floating froth of bitumen and a clean layer of sand which would sink to the bottom of the tank. The hot water flotation method pioneered by Ells, Fitzsimmons and Clark proved, over the years, to be the most viable method of extracting oil from the sand.

In 1936, another developer, Max Ball, founded Abasand Oils Ltd. His plant west of Fort McMurray produced diesel oil from the oil sands. There was a brief flurry of interest in his project, especially during World War II. When the plant burned down after being purchased by the federal government, the project died with the buildings.

The 1950s saw another upsurge in interest in the oil sands when the Alberta Government published a report indicating that production from the sand could be a profitable venture.

Birth of an Oil Sands Giant

In the late 1950s, two small companies – Cities Services Athabasca and Royalite Oil Company – joined together to research how best to develop the oil sands resources. At their small project along the banks of the Athabasca River, their hope was to one day apply their learnings towards something truly significant.

Two other companies – Imperial Oil and Ritchfield Oil – shared this dream and soon joined them in a focused research and development program that would explore economically viable processes for eventual large-scale commercial application.
However, even back then, development of the oil sands was a costly ambition. So the companies entered into a joint venture agreement under the name the Syncrude Project to pool resources and share both risk and reward.

On December 18, 1964, they incorporated a company called Syncrude Canada Ltd. to manage this complex endeavour. This company would then enter into an ownership and management agreement with the joint venture companies (commonly called “Participants”) and was given the responsibility to oversee and administer the day to day operations of the project, as well as commercialize the great research advances that had been realized. Frank Spragins, an Imperial employee, was named its first president.

The company’s only department at the time was Research & Development. It consisted of a small group of geologists, engineers, planners and inventors committed to Frank Spragins’ vision to create a profitable, sustainable and responsible energy industry from the abundant oil sands resource. 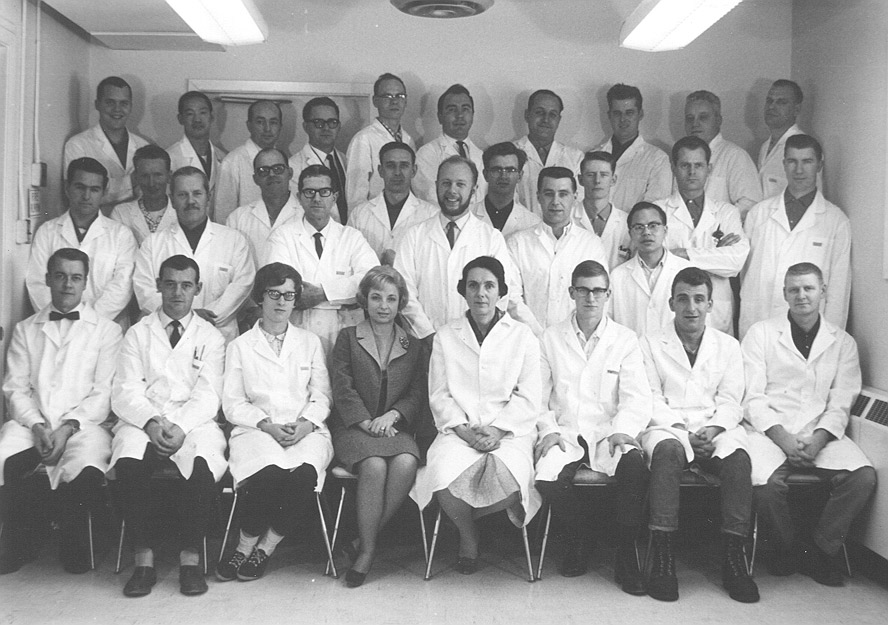 Putting a shovel in the ground was easier said than done. Delays in regulatory approvals, escalating costs and then the pull-out of Ritchfield Oil (then Atlantic Ritchfield) in 1973 left completion of the Syncrude Project in jeopardy. 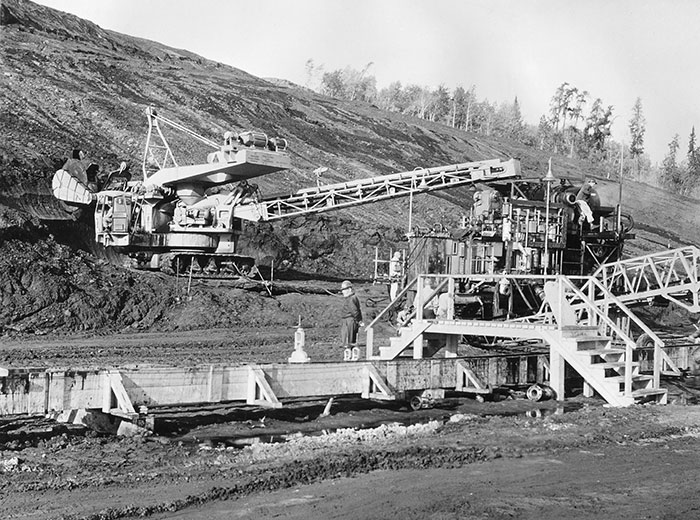 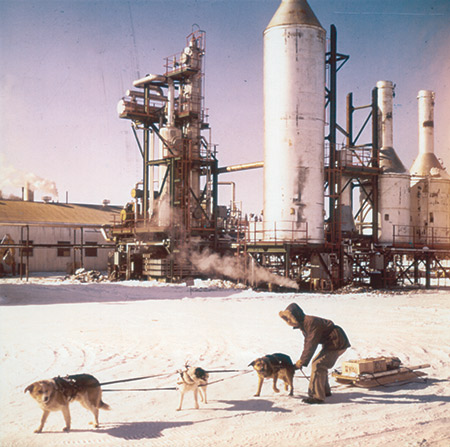 Fortunately, a last-ditch-effort meeting involving the Syncrude Project Participants and government leaders turned the tide. The governments of Alberta, Ontario and Canada agreed to take over the remaining share of the financing. The dream was saved and construction hit fever pitch.

Syncrude production officially began in September 1978. And the rest, they would say, is history. 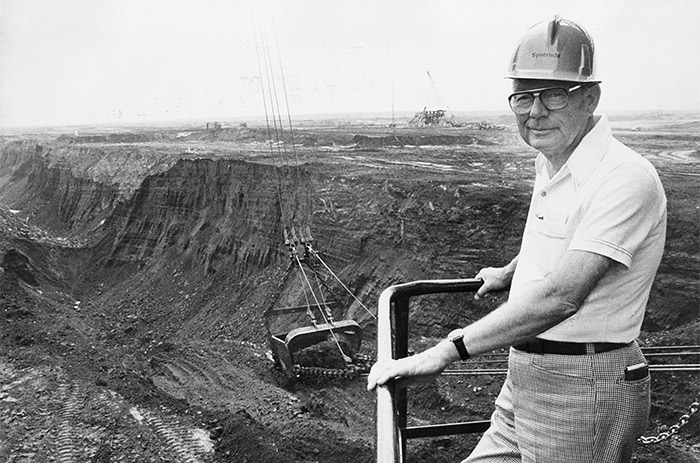 Frank Spragins was Syncrude’s first president. A passionate and visionary leader, he is
considered one of the greatest pioneers in the history of the oil sands.