Growing up in Saskatchewan, Dallas Heisler understood the importance of water from an early age.

“Water is prized given the prominence of farming where I grew up,” says Dallas, Syncrude’s Pit Lake Co-ordinator. “But we also recognize the value of water in the Wood Buffalo region. While agriculture isn’t a major industry here, the lakes, rivers and wetlands are very important. People want them to be protected. That’s no different than back home.”

Syncrude is bringing those values to managing Base Mine Lake, the demonstration project for its water-capped tailings The lake, which covers 800 hectares just south of Syncrude’s Mildred Lake upgrading complex, was a former mine pit prior to being a tailings pond.

“Syncrude completed tailings infilling at the end of 2012 and began importing fresh water from the Beaver Creek Reservoir starting in 2013 so there is now approximately 40 metres of fluid tailings covered with about 10 metres of water,” says Dallas. “Researchers from Syncrude (Medical equipment helps solve Base Mine Lake monitoring mysteries) as well as several universities, including the University of Toronto (Water is in her blood) and the University of Calgary (Micro organism hunter sees signs of progress in Base Mine Lakes microbial communities) have monitored the progress of Base Mine Lake since then. What they’ve found is the fluid tailings are dewatering, which reduces their volume. We’re also seeing promising changes in the water quality, which is in line with the 40 years of previous research we’ve done on water capping.”

Because Base Mine Lake is designed to function as part of a wider reclaimed landscape, it operates as a flow-through system with inflows and outflows similar to natural lakes.

“The inflow comes from the Beaver Creek Reservoir from the south. Right now, the outflow water is returned to Syncrude’s recycle water system,” Dallas says. “While the goal is to eventually have the lake flow out to the Athabasca River, we need to store that water on site at the present time until the federal governments establish regulatory criteria for treated mine water into the environment.”

Syncrude is working on demonstrating two technologies – water-capped tailings technology and coke-treatment (Warren’s innovation will help reclaim tailings ponds faster. – Syncrude) to eventually allow the release of mine water into the environment. Those releases are anticipated to be managed consistently with other releases approved from other industries in Alberta and Canada. Until then, all water – including Base Mine Lake’s outflow – must remain stored on site. “We are operating close to our capacity for mine water and tailings so we are looking at all options as we do not want to build a new tailings facility,” Dallas says. “As a result, we have decided not to bring in fresh water from Beaver Creek Reservoir to Base Mine Lake for this year. It is the responsible thing to do in order to manage our water inventory on site.”

The extensive monitoring program will continue to track changes within the lake through the year to determine how the change in water inflow influences Base Mine Lake’s performance.

We have a solid plan in place.

“We’ve tied this into all the work being done on the monitoring and research. We’ll continue collecting samples and getting researchers out on the lake and reporting those findings.” 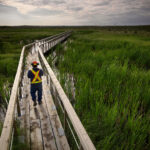 The beauty beneath the fen 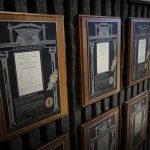