The beauty of Sandhill Fen is more than skin deep. It goes deeper than the beauty of the plants and animals that thrive in its carefully designed wetland valleys and forested hills.

It penetrates some 60 metres below the surface landscape, where a Syncrude-developed technology enabled the use of oil sands mine tailings to fill this former mine pit back up to grade. In fact, the Fen and its surrounding watershed is the oil sands industry’s first example of mine reclamation over a foundation of treated tailings.

The Fen’s creation was part of Syncrude’s multi-pronged research spanning more than 20 years to design ways to construct the landforms that overlie the treated tailings; and foster the growth of peatlands, which are common in the natural landscape of the oil sands region of Northern Alberta. In essence, Syncrude set out to do what had never been done before. Syncrude has now published a Research Synthesis on its two decades of study.

The Fen was built in Syncrude’s former East Mine, an 11.5 sq. kilometre area at the company’s Mildred Lake site north of Fort McMurray, Alberta. Mining here ended in 1997 and the 57-hectare Fen watershed was commissioned in 2012, in the northern section of this site.

Before that topography could be created, the empty mine pit needed to be filled up, a process that was completed using Composite Tailings (CT) technology. This gargantuan task took more than a decade.

The CT process takes fluid fine tailings from tailings ponds (a mixture of water and suspended clay material) and mixes it with coagulant to create a slurry that is hydraulically deposited into the pit. The coagulant causes the tailings to quickly consolidate and release water to the surface of the deposit. This water is siphoned off and recycled; what remains is a soft sand-and-clay material. Too soft, for example, to support the heavy construction equipment needed to bring in the sand, soil and other landform materials that will overlie the tailings and allow later-stage reclamation and revegetation. 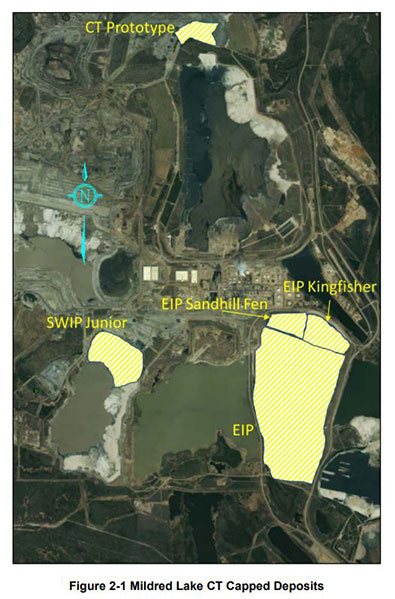 That meant a capping strategy also had to be developed. Wayne Mimura, Senior Associate Geotechnical Engineer, says, “Capping is a process of constructing a safe trafficable cap or cover over the softer CT deposit to minimize risk for people, animals and equipment. It allows the construction of topographic features such as hummocks (small hills) and swales (lowland areas) for reclamation and vegetation using sand. In particular, we wanted to form the sand cap such that the hills and lowlands would direct surface and ground water in a way that allows wetlands and forests to develop.”

Capping soft tailings deposits is done all over the world; while it hadn’t yet been done in the oil sands industry, there was a body of CT research created by the University of Alberta in the 1980s that Syncrude had supported. Based on that knowledge, a series of small-scale capping tests were initiated to study both hydraulic sand placement (via pipeline) and mechanical sand placement (using large mobile equipment); these tests informed Syncrude’s commercial-scale application in the East Mine, where both techniques were used.

The capping technology creates a surcharge load over the underlying CT deposit. This allows the CT to dewater and gain strength over time, and minimizes the amount of settlement of the closure topography.

“This was the first in the oil sands industry,” says Wayne, who has been working for Syncrude for 32 years.

The technology is now also being transferred to successfully cap and reclaim other soft deposits.”

While R&D work to address the capping issue was underway, the parallel challenge of CT tailings reclamation was also being addressed. This involved engineers working together with natural resource scientists.

“Whenever scientists and engineers are faced with a new challenge, we start with what we know,” says Syncrude ecologist Carla Wytrykush. “Although we had never reclaimed CT before, we had a lot of experience reclaiming overburden landforms and the tailings sand slopes of external tailings facilities. We knew that the CT and sand cap would release pore water to the surface of the land. We also knew that other experts could help us.”

Syncrude involved researchers from several scientific disciplines in the design of the CT reclamation pilot.

By inviting these diverse perspectives on the challenge, the opportunity to create the Fen was identified. Tailings researchers and engineers explained CT and its properties. Wetland ecologists shared how different wetlands form.

We knew we needed to develop CT reclamation practices, and we knew that fen reclamation was important to government and Indigenous stakeholders.

Through collaboration, we brought these two challenges together into an incredible opportunity to advance CT and fen reclamation at the same time; the result is the Sandhill Fen Research Watershed.”

Carla says, “The Fen was built at the north end of the East Mine as soon as we could drive on it. Today, after nine years of intensive research and monitoring, it has an incredible story to tell: The wetland supports a range of plants typical of peatlands in the region; we’ve got peat formation; and we’ve got carbon accumulation. Those are huge wins in my mind. It’s informing how we are reclaiming the rest of the East Mine area. This work will be fully completed in the next few years and it will be the first fully reclaimed mine in the oil sands.”

The next time you hear about the Sandhill Fen, think about the beauty enshrined deep beneath the lush, green wetland. 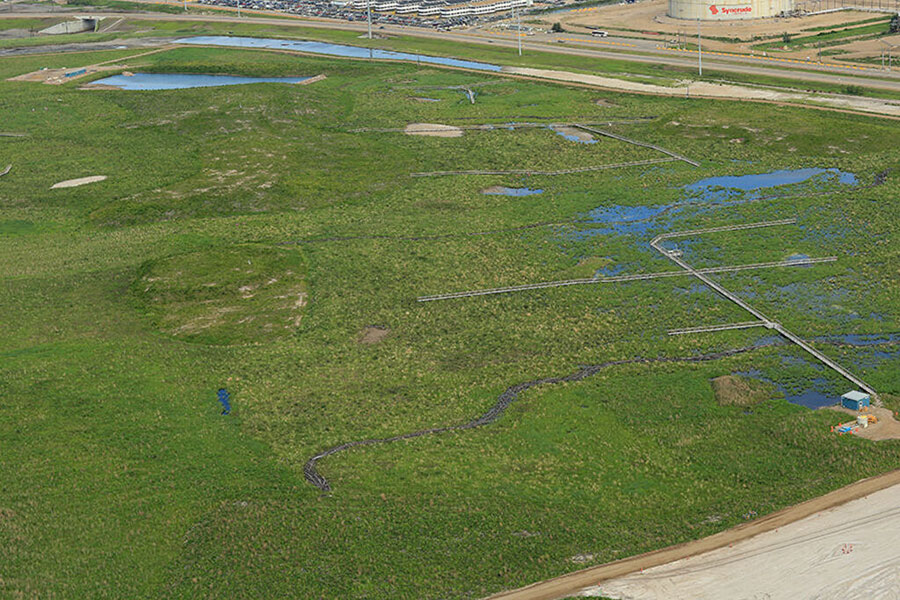 Those interested in the synthesis of Syncrude’s Composite Tailings Capping Knowledge, which includes learnings from the Sandhill Fen Watershed, can download the materials here. The Synthesis includes research summary reports and a bibliography of scientific publications. Syncrude thanks the University of Alberta for making the Synthesis accessible to everyone on their Education and Research Archive online library. 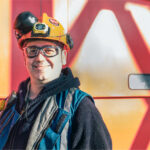 Shane and his team boost our bottom line.

Reservoir untapped for 2021 due to limited storage capacity