Sheldon Aylward was walking down the right of way for a new access road being built for Syncrude’s Aurora site on July 25 when something white caught his eye in the dark reclamation material being salvaged.

Upon closer inspection, the foreman with North American Construction Group realized he had spotted something important.

“I do a lot of hunting and fishing and I figured it might be a bison based on the skull. It was sticking out of the material. We had a lot of rain at that time. I figured the rain would have washed away the material covering it,” says Sheldon.

Sheldon immediately alerted Syncrude’s mine operations, who sent out Geologist Patrick Dunbar to investigate the discovery while the North American crew taped off the area to protect what they found.

“After carefully removing material from around the skull, it was very exciting to pull it out of the bank and see a complete skull with both horns, all of its bones and even almost all of its teeth still intact.”

Patrick carefully documented the finding by taking photographs before speaking with Chris Jass, the curator of Quaternary (Ice Age) palaeontology at the Royal Alberta Museum about preserving the skull.

“We take the utmost care to preserve any fossils or artifacts found on our leases,” says Patrick, who joined Syncrude in 2017. “Syncrude has put protocols in place to ensure these finds are protected.”

The skull represents a significant paleontological find for the museum due to its age, condition and location.

“One of the biggest research questions for us is how did we go from an ice-impacted landscape where nothing lived in Alberta because of the presence of giant sheets of ice from 25,000 to 15,000 years ago to what you see today,” says Chris. “This skull doesn’t tell that story by itself but represents a piece of that puzzle. We also have not received a lot of fossils from northern Alberta because it is covered with the vegetation and the soils are fairly acidic, which can break down bones quickly. We don’t have a good Ice Age fossil record from northeastern Alberta so this is very exciting for us.”

Chris estimates the skull is up to 5,000 years old based on the size of the horn cores in the photos taken by Patrick. “Bison migrated to North America about 200,000 years ago based on evidence found in Yukon and Alaska. Prior to the last major growth of glacial ice starting 25,000 years ago, horses were more prevalent than bison,” Chris says. “When the glaciers receded ~15,000 years ago, bison populations just explode and it becomes that iconic symbol we associate with the western landscape.”

Chris will have a better idea of the skull’s age once it is transported down to the museum from Syncrude’s site, something that will take place when COVID-19 restrictions are eased. However, he praised the way Syncrude handled the discovery.

“What everybody did was perfect. This is essentially what we ask for, if something is found, make sure it gets aside out of harm’s way and contact us so we can preserve these heritage resources for all Albertans.”

“We appreciate it when people and companies act responsibly. This is going to be an important part of the museum’s Ice Age paleontology collection.”

That’s something Sheldon appreciates. “I’m not going to lie. When I first saw it, I thought it would look great hanging from the wall in my garage,” he says. “The neatest thing that I’ve ever found. I’m proud to be able to help preserve an important piece of history.” 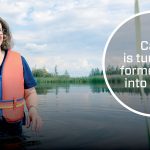 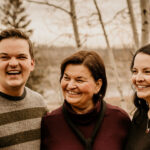