Heavy haulers have become one of the iconic symbols of the oil sands and the biggest of these larger-than-life machines – Caterpillar’s 400-ton 797 – marked 20 years on Syncrude’s sites last month.

Geoff Shantz was a heavy duty field mechanic working on the fleet when they first arrived at Mildred Lake. He says Syncrude was front and center in the development of our 400-ton truck class as we know them today. “After updating these trucks for our needs, we were able to raise the payload from 360 ton to 380 ton capacity.”

Syncrude purchased six 797 haulers out of 30 initial test prototypes built by the manufacturer.  The 17-100 unit was the first truck acquired in July 1999, with all six rolling out in January 2000. Doubling its expected shelf life, the original six are still running at Aurora’s mine today. Syncrude currently has 33 active 797 haulers at its Mildred Lake site and 47 active at Aurora.

Industry made the move towards truck-and-shovel operations in the early 1990s away from bucketwheels and draglines. “Bucketwheels and draglines required a lot of taking apart and reassembling of equipment every time we needed to move them. The shift to truck and shovel enabled us to be a little more flexible and selective,” says Brent Boutilier, Senior Project Manager.

Geoff notes Aurora is the worldwide leader in heavy hauler availability. “Considering the age of the fleet, this is a big achievement. There are many people involved who deserve credit for this achievement, which has changed our history and operations.” 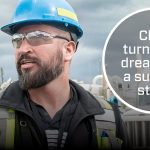 Water is in her blood 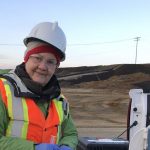