It was a blustery winter day on February 16, 1993 when six mature wood bison cows and 24 calves were offloaded from trucks onto snow-covered reclaimed land at Syncrude’s Mildred Lake mine. The small herd had come from Elk Island National Park, nearly 400 kilometres south of Fort McMurray, and was blessed in a ceremony by Elders from the Fort McKay First Nation.

Twenty-five years later, the herd at the Beaver Creek Wood Bison Ranch now numbers around 300 and is prized for its health and genetic purity by breeders from across North America. The ranch marked its silver anniversary this year with a ceremony featuring Fort McKay Chief Jim Boucher, who lauded the history of the ranch and the courageous decision made by Syncrude and Fort McKay in pioneering bison conservation on reclaimed lands. Also in attendance were ranch workers, Syncrude employees and executives, including Peter Read, Vice President of Strategic Planning, who remembered the early pioneers who had worked at the ranch back then, as well as the continual successes of the current team. Read also saluted Fort McKay Elder Harvey Roland, who previously worked on the ranch.

In early February 2018, around

Nestled near Highway 63 below the north east corner of the Mildred Lake Settling Basin, the 150 hectare parcel of reclaimed land provides a habit that for the first time at Syncrude, exposes the bison to tall trees.

In this video, Ken Bell, Syncrude’s Vice President of Strategic Planning, as well as Ranch Manager Brad Ramstead of the Fort McKay Group of Companies discuss both the 25th anniversary as well as the new pasture. 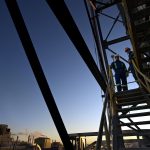 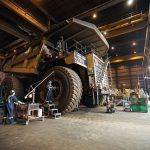