Syncrude’s heavy equipment operator, Maggy Horvath, unearthed what may be a nearly complete plesiosaur and the 10th fossil found on Syncrude leases.


FORT McMURRAY, Alberta – Syncrude’s heavy equipment operator, Maggy Horvath, unearthed what may be a nearly complete plesiosaur and the 10th fossil found on Syncrude leases. The discovery contributes to Alberta’s prehistoric history and the understanding of the evolution of life on Earth.

The fossil, which Horvath found during her shift on November 14, 2011, is currently being examined by scientists and technicians from the Royal Tyrrell Museum of Palaeontology, who are hoping to have the specimen removed by the end of the week.

THIS IS A VERY RARE FIND. IT’S A LONG NECKED PLESIOSAUR, WHICH IS A MARINE REPTILE WITH A VERY LONG NECK, SMALL HEAD AND SHORT BODY. THE LAST ONE THAT WAS RECOVERED WAS 10 YEARS AGO; IT WAS RECOGNIZED AS A NEW KIND AND GIVEN THE NAME <em>WAPUSKANECTES</em>

Director of Preservation and Research at the Royal Tyrrell Museum

“We are hoping that this is another specimen of this kind of plesiosaur. The new specimen is particularly important because it looks to be nearly complete.”

Horvath demonstrated great attention to detail and care in her work. After unearthing the fossil, she followed Syncrude’s protocol for fossil finds. This requires the operator to stop digging in the immediate area and notify Syncrude’s geologist who works with the Royal Tyrrell on fossil discoveries.

“I think it’s great that I’m part of this. It felt pretty good to call my son and let him know that I found a prehistoric fossil while working in the mine,” says Horvath. “As operators we always keep our eyes out for a find.”

Alberta’s oil sands are located in an area that was once part of a prehistoric sea. Several important marine reptile fossils have been discovered at Syncrude. The last one found in 2000 was 110 million years old and declared to be one of the most complete Cretaceous Ichthyosaurs of its age ever discovered in North America.

“This is a very exciting discovery for us at Syncrude and for all Albertans,” said Syncrude President and CEO Scott Sullivan. “It is also an example of how our employees take pride and responsibility in their work. It truly demonstrates Maggy’s skill as an operator.” 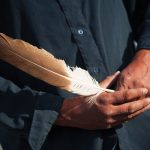 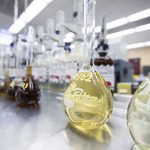